When we consider youth in the context of evolution, we know that the oldest fossil record of anatomically modern humans is the Omo remains that date to 195,000 years ago. We reached full “behavioral modernity” around 35,000-50,000 years ago. For almost all of our tens of thousands of years as a sub-species, humans became adults once they reached puberty. Humans in the ages 13/14-19 lived as adults, worked as adults, had children, and took on all of the responsibilities of adults.

While Hall coined the term “adolescence” in 1904, the first significant “adolescent” population did not appear in the United States and other industrial nations until the post-World War II baby boomers began to enter their teens in the late 1950s. 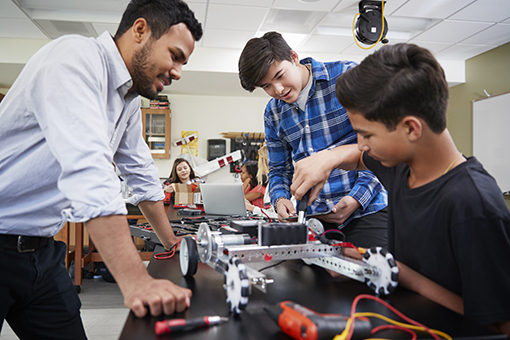 In 1900 barely 10 percent of the 14-17-year-olds were enrolled in school, the key social marker of the teen ghetto lock-out between childhood and adulthood. During the next five decades school enrollment in this age group in the United States exploded from the atypical to the norm: to 31 percent in the 1920, 50 percent in 1930, 73 percent in 1940, 76 percent in 1950, and 87 percent in 1960. During these decades, “adolescence” evolved from an uncommon experience available mainly to the male children of the wealthy to the normative cultural experience for youths, male and female, in the United States. Other industrial, modernist nations have followed a similar trajectory of change.

The key insight in these data is this: within our long history as a sub-species, “adolescence” is a startlingly new phenomenon—and it’s not surprising at all that we don’t know that much about its potentials.

What did adults do with these tens of millions of adolescents when they first appeared without warning? They sentenced them to 30+ hours each week in secondary schools plus more hours for homework, even though the paradigm of the academic high school had been created for a very different purpose and a much smaller fraction of the population. Adults excluded youths from most of adult life and, instead, dumped them into the age ghetto that quickly became youth culture, where they became easy targets for corporate manipulation. 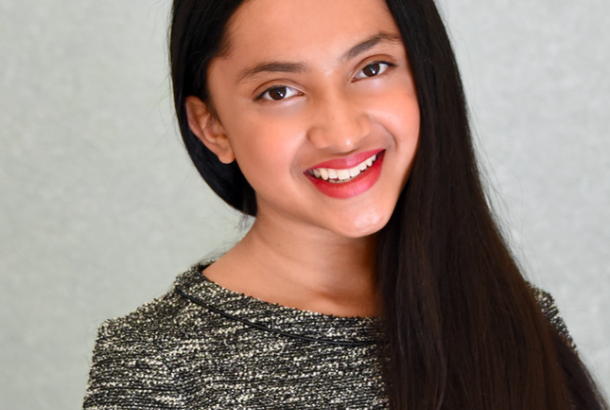 Mahika Halepete founded AYANA International, a new organization that holds a youth innovation lab which helps young people in developing countries, age 12-22,  identify problems in their communities and come up with their own solutions.

After school and homework, Mahika gets online in her home in San Jose, California and connects with changemakers across the world. These teens are, like her and others in the network she created, solving social problems in their schools and communities. “Really caring about a problem is what sets you apart, not your age or whether you have a college degree,” she says.

At 14, Mahika signed up as a virtual tutor for girls in Africa. This volunteer experience led her to explore international development issues and read all she could. She discovered that, across the globe, aid systems were failing the communities who needed them most.

“No one was actually asking or listening to these people… the projects aren’t designed with and for their intended communities,” said Mahika. “What better resource than the untapped potential of developing communities’ youth to be the drivers of change in their communities?”

Mahika founded AYANA International, a new organization that holds a youth innovation lab which helps young people in developing countries, age 12-22, identify problems in their communities and come up with their own solutions. The most compelling ideas are then funded by external partners. Working in teams, the young people implement their ideas and take responsibility for their continued success.

In less than a year, AYANA has facilitated ten groups of young changemakers across Kenya, Tanzania, Cameroon and Rwanda. Their projects include a handwashing station that reduced sickness and increased school attendance, a mobile library that gives kids access to books and reading, and a project to provide at-risk adolescent girls with mental health services and computer skills training.

“Youth emerge from our program with a new look at the world,” Mahika explains. “They begin to see problems as opportunities.” In a world that is rapidly changing, this ability to adapt to and drive change in a positive way is not something nice to have, it is critical, particularly for young people. “I think that if we lived in a world where everybody did that. . . an everyone a changemaker world, then we would start to see not just short-term handout initiatives, but real systemic changes in our society and in our problems that are holding some people back.”

It’s not at all surprising that our initial social and cultural responses to the sudden appearance of tens of millions of youths were so misguided. The manifestation of “adolescence” on a mass scale was a radically new evolutionary step for homo sapiens. For the first time in our existence as a species, we had an opportunity for tens of millions of individual humans to explore and develop their human potential, to find their gifts and their callings, and to evolve into a much more complex and articulated consciousness. Right on schedule, the human potential movement—part psychology, part spirituality—emerged in the 1960s culture and began developing tools for this evolutionary step up-ward. At the very same time, spiritual teachers from Asia came to North America and western Eu-rope in some numbers and began to teach the tools for evolving consciousness that are embedded in most Asian spiritual traditions.

But the men with power—and they were almost all men—in our industrial society had no in-sight into either evolution or human development. They feared the human potential movement and ridiculed Asian spiritual traditions, and they fought to delegitimize these insights and destroy this initial evolutionary flowering. They worked hard in this campaign—and they are still working harder than ever—to keep youths in conventional, industrial-paradigm schools, youth culture ghettos, which block both the development and maturation of individuals and the evolution of the species.
Every political, corporate, and educational leader who wants every youth to learn the same material at the same time as every other youth is an obstacle to the evolution of our species that our times demand.

So here we are now, three generations into “adolescence,” and as a culture we are ignoring or repressing this profound evolutionary possibility.

Margaret Mead explained one aspect of where we need to go with youths in terms of cultural evolution in her book, Culture and Commitment. (1970, 1978. New York: Columbia University Press.) Mead described three cultural paradigms in terms of their teaching/learning relationships be-tween the young and the old:

All human societies prior to the 20th century were postfigurative. Pre-agricultural societies, in which humans lived for 80%-90% of our species life, changed little if any. Agricultural societies, beginning about 10,000 years ago, did change but slowly enough not to alter the dynamics of cultural transmission very much. In contrast, industrial societies have experienced continually accelerating change for about 250 years, a moment in the history of the species.

What our societal leaders unknowingly did in the 1950s in the United States, Canada, and western Europe was to create a cofigurative culture. Youths were sentenced to years of schooling, even though formal schooling is unengaging and unproductive for most of them. They were excluded from meaningful roles in the adult world, and youths’ capacity for perceiving the present in a quickly changing society more acutely than their parents was ignored or ridiculed. Youths responded to this exclusion by creating their own youth culture, which both in its 60s counter-culture form and its later rap/hip-hop form included considerable hostility to and contempt for adults. Adults responded by viewing youths as dangerous: the putative gangs in the 1950s, the counter-culture in the 1960s, the supposed “super predators” of the 1980s, and so on.

In our cofigurative culture, many youths feel sentenced to years of high school, which offers them a repressive, alienating, and largely meaningless experience. So, they look to each other for engagement and meaning. Yet youths are not mature human beings, so the culture they create is immature and often egocentric. 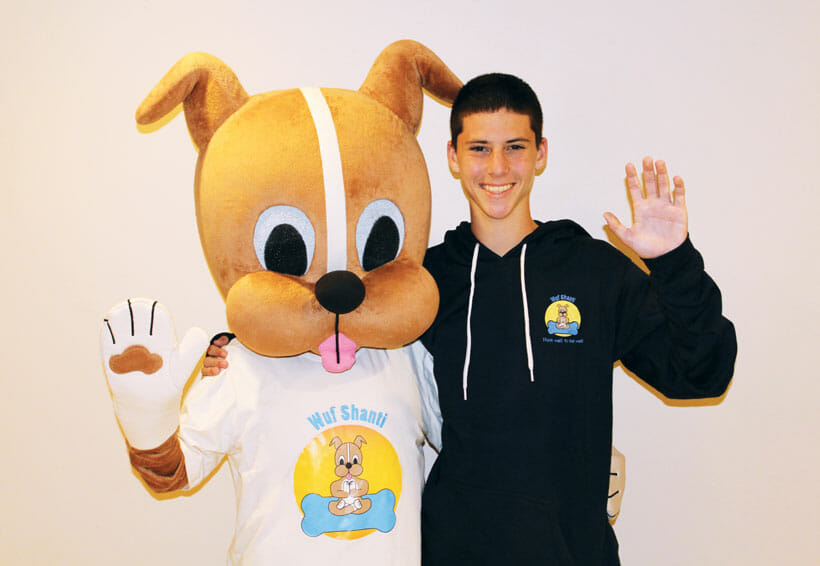 The Wuf Shanti Foundation promotes health and wellness, peace and positivity in children’s lives, Adam explains. Through videos, books, a mobile app, music, and games, children learn yoga, meditation, communication, inclusion, social emotional learning, and positive thinking to help them stay physically fit, mentally less stressed, and more able to cope with emotions and interact with kindness. Wuf Shanti has been honored to receive many awards, and Adam’s leadership has been acknowledged on many occasions. Adam founded the Kids’ Association for Mindfulness in Education and served as co-founder and host for the Mindful Kids Peace Summit.

What we need to create, Mead argues, is a prefigurative culture in which the capacity of youths to see the world anew is valued by adults, with youths making new sense of phenomena using their idealism and creative vision as well as their sometime harsh critique and unbalanced judgment. In such a culture, youths would be welcomed into adult society as contributors with different strengths and limitations, and youths who were engaged in this way would value the experience and wisdom of adults. Fifty years ago, Mead saw the destructive divisions and the denial of wisdom that a cofig-urative society engenders and argued that we need to move beyond this dead end.

What kinds of experiences and social structures would we offer youths if we understood youth rightfully to be a new stage of human development that can allow a more complete unfolding of each human’s potential? This is the creative challenge we need to answer today. And we can only create the social structures needed to support and enhance the potential creativity of youth if we free youths from the teen ghetto and integrate them into adult society.

The evolutionary potential of youth as a stage in human development can be realized when great numbers of individual human beings discover in these early years of their lives what it is that makes them come alive—their gifts, their passions, their callings—and they begin to “go do it.” Not later on. Not when they’re older. Now, today.

This is exactly what our species needs, to unleash our most profound creativity and capacity, if we intend to evolve through the crises and challenges we have created for ourselves in this century.